In the never-ending rain of a senseless autumn, we point the car southwards in search of sun, stone, stories and things we’ve never seen before. In the attempt to get our idea off the ground, we send a couple of messages to people who, until now, had only been user names or profi le images in the chaos of the web. In just under an hour, we get our answer: what you’re looking for is right here... --- 600 km travelled through the night mean we wake up in the heart of Tuscia, just outside the town of Brancaleone. Waiting for us is Pedro, valiant knight from the Sadomasoclimb army, a devotee of brushing, of adventure and of all those experiences that transform everyday climbs into something rare and creative. Pedro and the Sadomasoclimb association are a group of climbers like so many others, but with the added desire of wanting to stand out for their initiative as well as their climbing skills. Their actions include rebolting and safeguarding some cliff crags in the Rome area, as well as seeking out new forms of climbing, in an area that from this viewpoint, is without. Traditional climbing, mainly used on the walls of Gransasso, has rarely touched lower levels, unless it is thanks to them and a few others who, in Tuscia, have tried out the British approach to rock climbing. Peperino grigio is a volcanic rock that can be found here and on Easter Island. This is proved by the Moai built by 11 natives of the island, who came here seeking a similar stone. As well as having nicks and holes that, as they say here, are “chewed up”, these stones open into “cracks” that are often irregular and complicated, where placing protections is as much a science as a gamble. In spite of these problems, the desire to add new elements to the climbing mix has pushed the Sadomasoclimbers to look for traditional lines in the woods of Bomarzo and Vitorchiano. --- After the fi rst day, where we honoured the “native lines”, we settled in the centre of the mediaeval village and looking out from one of the terraces overlooking the valley, we saw that there was a genuine playground hidden right under the walls. The very next day, as the morning mist began to fade, we went up to the stone layers that the village is built on, but as soon as we got on the more evident line (a perfect crack for the hand, which opens to a fi st in the last few metres) a principled municipal police offi cer appeared from the terrace, inviting us to come down, and seemingly putting our day’s fun to an end. In the time it took us to get ready to thwart this attack, trying to put together a few reasons that could justify our attempt to tackle Vitorchiano, the council offi cer for tourism appeared like a knight in shining armour who, having been informed by a local, approached us with open arms, asking us if it was possible to climb all around the rock, meaning he could add another tourist attraction to his mediaeval village. A little more than 5 minutes was all it took to bury the hatchet with the council and set up a quick “clinic” on how to use removable protections. At this point, with the permission of the local authorities, the day continued in its “carefree” tone, with us tackling the rock along its four obvious cracks. And all we left on the stone were perhaps a few marks in magnesite. The breaks came from cemented stops that were already in place to stretch a wire cable, for reasons we failed to understand. To be continued? I don’t know... We’ll fi nd out after the elections for the new council. Hurray for the mayor! 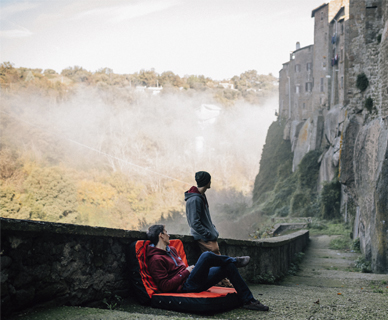 This website uses cookies to give you a better user experience. Please remember that if you turn cookies off, certain features of this website may not be available to you. otherwise, by using this website, we’ll assume you’re ok to continue.OkFind out more